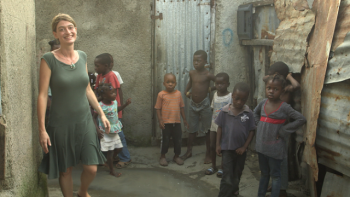 Everyone poops. But not many people really think about what happens to it. We flush the toilet and it is out of sight and out of mind. Sasha Kramer, on the other hand, has poop on her mind all the time. She is a sanitation revolutionary helping to transform human waste into fertile organic compost for agriculture and reforestation in Haiti. “Arguably,” Kramer says, “the most important thing in nature is soil, that’s where all life comes from.”

Kramer is an ecologist, human rights advocate, National Geographic emerging explorer, and the executive director of Sustainable Organic Integrated Livelihoods (SOIL). SOIL primarily focuses on promoting the use of ecological sanitation, a process that uses naturally occurring microbes and heat to convert human waste to rich compost. Ecological sanitation at SOIL means dry composting toilets, which can be simple and low cost so that it works even in crowded, informal settlement communities where there is little infrastructure.

Sasha Kramer visits the community of Shada, where SOIL has provided ecological sanitation for ten years.

So how exactly does this work? Kramer explains: “The way ecological sanitation, in general, works, is that people have a small in-home toilet, that basically has a five gallon bucket in it, where the poop falls. Each time you poop, instead of flushing with water (which is such a valuable resource), we use some sort of a dry carbon cover material. This would be some sort of agricultural waste that’s otherwise not being used. You basically cover it up and then that keeps the smells from coming out … and it keeps the flies from coming in.”

Each week, service agents pick up the buckets from each household, and give clean buckets with the cover material in it. Then those full buckets are transported to one of SOIL’s composting sites. The fleet of “poop mobiles” includes pick-up trucks and wheelbarrows, as some of the corridors in impoverished communities are too small for any type of vehicle. “At the composting sites, it’s wonderful because instead of relying on fossil fuel to treat the waste, we really rely on the power of ecological systems. Once we dump the waste most of the work is done by naturally occurring soil microbes.” These microbes take care of the treatment process, as they naturally heat the piles up to 170 degrees Fahrenheit, which kills the pathogens that make people sick. The staff turns the piles a few times and after about six months, voilà, the finished product is rich soil.

These bucket toilets are not some eco-alternative to other kinds of toilets: they’re often the only dignified option available. Thousands of people in Haiti don’t have a private place to go to the bathroom. “People do what they have to do. If you’re in a rural area, maybe you go out and you go behind the tree. Probably most of us have done that too,” Kramer says. “If you live in a very dense urban area, then usually what people do is they use a plastic bag. They go into the most private place they can find. Go in a plastic bag, then throw in that plastic bag in the least offensive place they can find. That usually means the canal, or an abandoned lot.” With a high water table, flooding, canals draining into rivers, and no water treatment, the human waste ends up in the water supply. “What that means is that the water people are using to drink, to bathe, to wash their clothes and to wash their dishes basically has poop in it.”

Turning poop into soil instead of letting it enter the freshwater supply has a direct relationship to public health. Some of Haiti’s toughest challenges include childhood diarrhea and cholera. Kramer said, “Haiti has the highest rate of childhood diarrhea in the entire world. The world. Which means that for children under five, this is a leading cause of sickness. It’s actually poop in the water that’s making them sick.” Since 2011, Haiti has been battling the world’s largest and most virulent cholera outbreak in recent history. “One in six people in Haiti in the last five years had contracted cholera,” Kramer says. The problem has reached the level it has because of the lack of sanitation.

Most people probably think flush toilets are the solution, but, as Kramer explains, “A toilet without waste treatment is just a way to displace the problem—even if you have a very nice flush toilet in your home. If that water is just being flushed out into a canal near your house, and then washed into the community downstream, yes, you may have provided a certain level of protection to your family. But on the community level, on a public health level, you only displace the problem.”

Where people go, poop follows, and so do the nutrients. What’s happening is the migration of people into urban areas means there’s actually a migration of nutrients as well. There is a problem with decline in soil fertility in rural areas, Kramer explains, and that can create dependency on foreign countries to send fertilizer to restore the soil. “The way to break [the] cycle of environmental destruction is to take those nutrients and instead of allowing them to go into aquatic ecosystems, getting them back onto the soil [to enrich farmland]. One way to do that is through compost production.”

Kramer says that she and the team at SOIL are excited about this work because it’s a way to simultaneously work toward solutions for both the problems of access to dignified sanitation and this problem of declining soil fertility. “One of the reasons that people in Haiti get really excited about ecological sanitation and the fact that we can transform poop into soil is because it means that Haiti is harnessing its own resources. This is a country where people take tremendous pride in independence and local production.” Instead of polluting, it’s an opportunity to rebuild.

A local farmer holds up a bag of compost and says that, “You can sprinkle it on the soil and it restores fertility!” Photograph by James M. Felter

“SOIL could never be as successful as we are without having strong connections to community leaders and the places that we work. I believe that the key to our success is that we hire people based on whether they are able to be community leaders. Ninety percent of our staff is Haitian.” Kramer has been living and working in Haiti since 2004 and is proud of SOIL’s mission to make sure the technologies are culturally and locally appropriate. “There are groups that are trying to have a cookie-cutter solution that they can just replicate all over the world. What gets in the way is that each culture is different. You need to be able to adaptively respond to those different needs. Really the best way to do that is to take these technologies and share them with locally based groups, locally based businesses, governments. People who really know the communities in which they’re working.”

It’s safe to say that the way SOIL is taking on the cycle of “the Poop Loop” is a win-win solution for Haiti’s communities and environment. Kramer seems as motivated as ever. “I have such an amazing team of dedicated, passionate, brilliant people around me everyday, that when you work in an environment like that, you can be knee deep in poop and it’s still the best job ever.”

Read more about the philosophy behind SOIL on their website.

And check out more from other explorers in the #bestjobever digital series.