Trudeau meet with ministers on Haiti, says ‘we have to intervene’ somehow 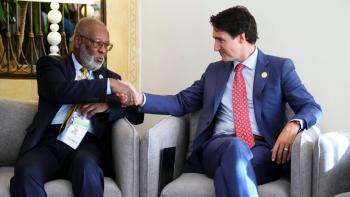 Haiti‘s ambassador to Canada faced stiff questioning Wednesday over his country’s controversial request for a foreign military intervention, as the Liberals argue Ottawa must respond to a cascade of humanitarian crises.

“The violence orchestrated by armed gangs is blocking the country and plunging millions of Haitians into an acute humanitarian crisis,” ambassador Wien-Weibert Arthus told the House foreign-affairs committee in French.

“It is a desperate situation for which there must be a solution.”

Rampaging gangs have cut off access to Haiti’s primary fuel terminal, leading to power outages and unclean water that has worsened a cholera outbreak.

Henry’s government has been in charge since the assassination of former president Jovenel Moise in July 2021, and has argued that the country cannot have an election during instability from COVID-19 outbreaks and now widespread organized crime.

Arthus noted children have been out of school since June, and urged Canada to help not only stabilize the country but provide aid for infrastructure, to stop a cycle of poverty.

He said his country has barely recovered from the 2010 earthquake, but putting Haitians to work could avoid future instability.

Liberal MP Emmanuel Dubourg challenged Arthus on rampant government corruption in Haiti, and asked whether the request for foreign intervention amounts to an admission of failure.

“In the soul of any Haitian, a foreign force is never welcome in the country,” he said at another point in his testimony.

Dubourg, a Montreal MP who immigrated from Haiti, also asked whether Canada needs to hold accountable elements of Haiti’s current government that are contributing to the corruption and impunity for violence.

“Each person who finances gangs must be sanctioned,” Arthus said in French, noting he has lost some of his own relatives to violence.

Dubourg also argued there is “no credible plan” for getting Haiti out of its crises, and Arthus acknowledged a lack of political consensus in Haiti but said there is widespread support for Canada to help.

“I’m not a dreamer but I keep hope that we will end up finding an agreement between Haitians,” he said in French.

Bloc Quebecois MP Stephane Bergeron said in French that many in the Haitian diaspora have concerns about Canada working with “a government whose legitimacy is highly questioned” and barely controls its own territory.

Arthus responded that Henry has addressed international bodies and leaders such as Prime Minister Justin Trudeau.

“At the same time, we look at the crisis, rapes, the violence, the poverty and the cholera and health crisis. And then we say to ourselves, we have to intervene in one way or another,” he told reporters in French.

Trudeau also convened a meeting Wednesday of cabinet ministers known as the Incident Response Group, which meets only when something has “major implications for Canada,” to discuss Haiti.

The group had a similar meeting two weeks ago. Since then, Canada dispatched a team to assess the beleaguered Caribbean nation, and it has returned and briefed senior officials in Ottawa.

On Monday, Canada’s ambassador to Haiti said Canada will be expected to take a leading role in assisting the country, as it’s among the most respected nations in Port-au-Prince.

Canada and the U.S. have already sent armoured vehicles to Haiti. Last week, U.S. Secretary of State Anthony Blinken visited Ottawa and Montreal, and hinted that Canada could play a key role in a military intervention.

The United Nations is currently contemplating a motion that would authorize a mission, which has been endorsed by UN Secretary-General Antonio Guterres.

U.S. officials say the UN resolution is expected to pass by early November, and have mentioned Canada as a candidate to lead such a mission.