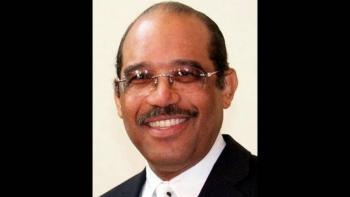 Dr. Joseph Baptiste, the chair and founder of the National Organization for the Advancement of Haitians, was convicted in a Boston court in a bribery scheme involving Haitian government officials.

A Haitian ambassador-at-large and his business partner, a prominent retired U.S. Army colonel, were both found guilty by a federal jury in Boston on Thursday of participating in a scheme to bribe Haitian government officials in exchange for business advantages on an $84 million port project in northwest Haiti.

Roger Boncy, the CEO of Hispaniola Invest, LLC, and a dual citizen of the United States and Haiti who lived in Madrid, and Dr. Joseph Baptiste, a Maryland dentist and founder and chairman of the National Organization for the Advancement of Haitians (NOAH), were convicted after a two-week jury trial. Both were found guilty of conspiring to violate the Foreign Corrupt Practices Act and the Travel Act, while Baptiste, 66, was also convicted of conspiracy to commit money laundering and an additional Travel Act violation. Boncy, 74, was cleared of the latter two counts.

Under the federal Foreign Corrupt Practices Act, it is illegal for Americans or U.S. companies to pay foreign officials to win business. The Foreign Corrupt Practices Act and the Travel Act counts carry a maximum of five years each in prison, while the more serious money-laundering conspiracy charge carries a maximum of 20 years. Both men are scheduled to be sentenced on Sept. 12 and will remain free until then, Boncy’s lawyer, Jed Dwyer of Greenberg Traurig said.

“Mr. Boncy is happy the jury acquitted him of the most serious counts,” Dwyer told the Miami Herald. “We disagree with, but respect, the jury’s decision on the least serious count.”

Baptiste’s attorney Donald LaRoche said: “Obviously we don’t agree with the verdict, but we are not done fighting.”

Both men came under the glare of U.S. officials after the FBI received a tip about the alleged scheme. It then conducted a sting operation in Boston, using undercover FBI agents posing as potential investors interested in the port project. The agents, for example, gave Baptiste two separate payments of $25,000 meant to be used to bribe Haitian government officials. The money was funneled through Baptiste’s nonprofit charity. The money, however, was “ultimately used ... for personal purposes” by Baptiste, an agent said in the criminal complaint.

Baptiste and Boncy were charged after prosecutors accused them of conspiring to pay millions of dollars in bribes to Haitian officials to be able to develop the port project in Mȏle St. Nicolas, a city in northwest Haiti. Prior to the charges, Boncy made frequent visits to Haiti, where he often spoke of the benefits of the project in bringing jobs to one of Haiti’s poorest regions and his frustrations with the lack of support from government officials.

Baptiste was a frequent visitor to Haiti and one of its diaspora’s most prominent and influential voices. He hosted U.S. lawmakers and Haitian prime ministers at his lavish home and informally advised U.S. State Department officials on Haiti matters. He was charged in an October 2017 indictment but had supposedly cut a plea deal at the end of December 2015 before backing out of it, according to authorities.

During the trial, prosecutors presented taped conversations between Boncy and Baptiste, and between them and the undercover FBI agents. The proposed project was to involve the construction of multiple cement factories, a shipping-vessel recycling station, an international transshipment station with numerous slips for shipping vessels, a power plant, a petroleum depot and tourist facilities.

Prosecutors said during a recorded meeting at a Boston-area hotel, Boncy and Baptiste told the agents that, in order to secure Haitian government approval, they would funnel the bribes to Haitian officials through Baptiste’s charity, NOAH, which was based in Maryland and meant to help poor Haitians. Among the accusations: Only part of the donations given to the charity, which also advocated for Haitian-American causes, actually went for projects while the rest went to pay off Haitian government officials.

In calls played during the trial, the jury heard Boncy and Baptiste discuss bribing an aide to a high-level official in Haiti with a job on the port development project, in exchange for the aide’s help in obtaining the elected official’s authorization for the project. Boncy and Baptiste also told the undercover agents that they would hide the bribes through money falsely earmarked for social programs and that they would bribe officials at all levels of the Haitian government, prosecutors said.

During the trial, prosecutors revealed that the aide in question worked for Martelly’s prime minister, Evans Paul, according to the legal-news website Law360. Prosecutors said the job offers helped secure a letter of support for the project from Paul, Law360 said.

“Mr. Baptiste and Mr. Boncy had no problem soliciting bribes to funnel to senior government officials in Haiti through blatantly illegal means,” said special agent in charge Joseph R. Bonavolonta of the FBI’s Boston field office . “Every dirty dollar they were trying to secure undermines those who are trying to conduct business lawfully. Cases like this only fuel the FBI’s commitment to tackling corruption, and today’s guilty verdict ensures that both of them will be held accountable for their actions.”

Dwyer and LaRoche unsuccessfully argued that the government’s case was full of ambiguity. Before the trial, Dwyer tried to get the charges against Boncy dismissed, arguing in a court brief that “the government has destroyed and otherwise failed to preserve evidence that would show he is innocent.” The evidence involved two recordings. But U.S. District Judge Allison D. Burroughs denied the motion.

In a press release, U.S. Assistant Attorney General Brian A. Benczkowski said the “guilty verdict sends a strong message that those who use corrupt means to obtain unfair and illegal business advantages will be prosecuted to the fullest extent possible by the Department of Justice.”

U.S. Attorney Andrew E. Lelling said the U.S. will continue to target Americans who try to bribe foreign public officials for business advantages: “Bribery of public officials corrodes public trust and victimizes the public these officials are supposed to serve.”

During the trial, prosecutors presented recorded conversations to argue that Boncy and Baptiste solicited bribes from undercover FBI agents posing as potential investors in connection with the port project.