The U.S. doubles down on Its failed Haiti policy 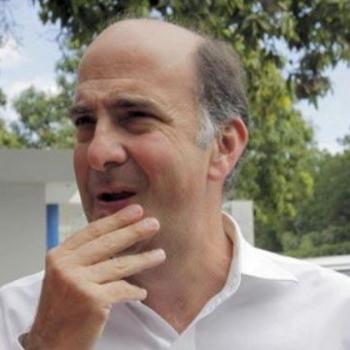 Kenneth Merten, then U.S. ambassador to Haiti, talks with the news media outside of the judicial police headquarters in Port-au-Prince, Tuesday, January 19, 2010. (AP Photo/Lynne Sladky)

Hardly anyone in the United States has heard of the senior American diplomat Kenneth Merten, but in Haiti, he was already a widely disliked household name even before the State Department reassigned him to Port-au-Prince on October 12. Haitians view his appointment as a provocative sign that the Biden administration will continue interfering in their country’s affairs.

Meanwhile, the mainstream U.S. media is giving front-page coverage to the October 16 kidnapping of 17 American missionaries—and to what The New York Times calls “a country reduced to near lawlessness by natural disaster, corruption and political assassination.” Left out of the sensationalist American reports, however, is the firm conviction of many Haitians that the disastrous U.S. policies of the past decade have contributed to the present instability and chaos, and that the appointment of Merten is a dangerous indication that the State Department is doubling down on failure.

U.S. policy makers have apparently learned nothing from the former diplomat Daniel Foote, who resigned his senior post last month with a blistering indictment of America’s role in Haiti. On October 7, Foote appeared before a House foreign affairs subcommittee to elaborate on his critique. Veteran Haiti watchers were astonished by his candor. He blamed the U.S. for manipulating Haiti’s politics, for imposing the current “de facto” prime minister, Ariel Henry, and for propping up the ruling party, the PHTK, which he said is “blamed by Haitians for putting Haiti where it is today.”

Haitians who know Merten, Foote’s replacement, tell me he is pleasant, and fluent in Kreyol, the national language. But they have bad memories of his previous role there. In 2016, for instance,  as special coordinator for Haiti, he vigorously pushed for Haitians to swallow the results of the October 2015 presidential election, which was widely regarded as rigged. Haitians resisted but held a questionable re-vote later that year in which the ruling party won again. One well-placed Haitian source told me the episode was “an electoral coup d’etat.” In recent days, old photos circulated on social media showing Merten beaming alongside the corrupt previous president, Michel Martelly; in one, the U.S. diplomat is even pictured wearing a pink wristband, the PHTK’s color.

But there is hope for Haiti. Foote told the House subcommittee that a broad-based coalition of civil society organizations and a range of political groups have already tentatively agreed on a comprehensive two-year transitional process that would restore order and eventually lead to new elections. The coalition pointedly calls itself the Commission for a Haitian Solution to the Crisis. (It is known as the Montana Accord, after the hotel where it was signed.) The group is also successfully negotiating with other political forces. “There’s been a good dialogue process, the best I’ve ever seen,” Foote said. “They’ve reached agreements in Haiti that I didn’t think they would ever come up with.”

The State Department is not heeding the advice of either the Haitian coalition or Foote, but it continues to prop up the discredited de facto regime. As Foote told the subcommittee, “Haitians are close to an agreement if it doesn’t have to include the Ariel Henry government, which is . . . perceived as completely corrupt, with impunity, with ties to the gangs. The U.S. should stop imposing Ariel Henry on the Haitian people.”

The Haitian people are not sitting by waiting to be rescued. On October 18, they carried out a successful nationwide road blockade and work stoppage, which closed the country down, to protest the wave of violence and to demand that Henry resign. The latest protest is nothing new. Earlier this year, tens of thousands of Haitians regularly filled the streets in pro-democracy marches, and back in late 2019 a general strike against corruption brought the country to a standstill for two months.

The New York Times did recognize the resistance with a brief report on Monday’s protest, after mostly ignoring the mass movement for democracy. But the Gray Lady and the rest of the mainstream press continue to say nothing about the Haitian indictment of U.S. policy, even though reporters could stop just about anyone in the streets of Port-au-Prince and get some sharp comments.

Over the years, apologists for the U.S.-Haiti policy argue, usually discreetly and sometimes with embarrassment, that the State Department supports undemocratic governments there because it craves stability, which it believes will prevent Haitians from fleeing to the United States—its number one concern. Daniel Foote demolished that view in his resignation letter: “I do not believe that Haiti can enjoy stability until her citizens have the dignity of truly choosing their own leaders fairly and acceptably.”