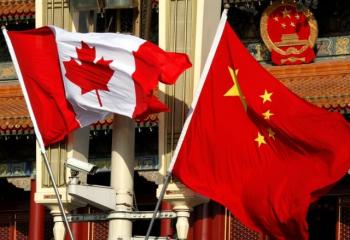 Like a dutiful servant of the global hegemon, Justin Trudeau just announced that Canada will join the United States in staging a diplomatic boycott of the Beijing Olympics.

Mr. Trudeau justified his decision on the basis that his government is “extremely concerned” about China’s alleged human rights abuses, particularly against the Uighur people in Xinjiang.

Political reporters should have responded to the Prime Minister’s claim with incredulity.

Predictably, they didn’t. Without a hint of scepticism, the mainstream media readily embraced Mr. Trudeau’s purported justification for joining the boycott.

How do we know that Mr. Trudeau’s official justification for joining the boycott is a smokescreen?

Because the governments of Canada and the United States exhibit contempt for human rights on an almost daily basis.

Let’s consider some recent examples, shall we?

In November, in flagrant violation of the Universal Declaration on the Rights of Indigenous Peoples, heavily armed RCMP officers arrested twenty-nine, unarmed land defenders on unceded Wet’suwet’en lands. Those arrested included photojournalist Amber Bracken, who was on assignment for news outlet The Narwhal, and documentary filmmaker Michael Toledano. Following the arrests, three land defenders revealed that they were transported by the RCMP in cages about the size of a dog kennel and were forced to appear before a judge in their long underwear and put in hand and ankle cuffs, even though none of them was armed when arrested.

On December 2, the Trudeau government issued a statement highlighting Canada’s “strategic partnership”with the U.A.E. In Yemen, a military coalition led by the U.A.E. and Saudi Arabia has killed thousands of civilians in airstrikes, tortured detainees, raped civilians and used child soldiers as young as eight years.

Not only does the Trudeau government maintain a “strategic partnership” with the U.A.E., it also sells billions of dollars-worth of deadly weapons to the Saudi autocracy, a tyrannical regime that oppresses women and murders journalists.

Meanwhile, at the United Nations, the Trudeau government has continued in recent weeks to vote against broadly supported resolutions condemning Israel’s abuses of Palestinian human rights. Earlier this year, U.S.-based Human Rights Watch joined with Israeli human rights groups B’Tselem and Yesh Din in accusing Israel of committing apartheid, the second-worst crime against humanity after genocide. None of this has diminished Justin Trudeau’s enthusiastic support for the state of Israel, nor has it prompted the U.S. government to suspend billions of dollars of military aid to Israel.

On November 3, the U.S. government admitted that the last U.S. drone strike before American troops withdrew from Afghanistan killed 10 civilians, including seven children. The Trudeau government expressed no ‘concern’ about this atrocity.

Days later, a New York Times investigation revealed that the U.S. military had covered up a 2019 airstrike in which it bombed a large crowd of women and children in Syria, murdering dozens. Again, the Trudeau government express zero ‘concern’ about the massacre.

Of course, these crimes in no way excuse human rights abuses committed by America’s official enemies.

There are, indeed, compelling reasons to be concerned about the Chinese government’s treatment of the Uighur people, and if the evidence establishes that the PRC is abusing their rights, then the PRC must be condemned, and every peaceful effort must be made to hold it accountable and end its human rights abuses.

What is happening in Xinjiang, however, is far from clear.

In January of this year, attorneys from the U.S. State Department advised the Trump administration that there was insufficient evidence to prove China is committing genocide. Trump nonetheless accused China of genocide on the last day of his Presidency.

At two separate meetings of the UN Human Rights Council in 2019 and 2020, letters condemning Chinese conduct in Xinjiang were outvoted, 22-50 and 27-46. The countries which joined in condemning China’s treatment of the Uighurs were overwhelmingly Western states that are closely allied to the United States, whereas those who defended China’s record included predominantly Muslim states, a number of which had sent representatives to Xinjiang in order to observe conditions there.

The 46th Human Rights Council Session in March 2021 saw no joint statements condemning Chinese policy in Xinjiang, while a joint statement in support garnered the signatures of 64 countries, with more than 80 countries supporting the Chinese position.

Finally, the ‘scholarship’ of Adrian Zenz, a far-right Christian fundamentalist who has led a campaign in the West to charge China with genocide against the Uighur people, has been largely discredited.

At the end of the day, further independent investigation of the human rights situation in Xinjiang is plainly warranted.

In the interim, we Canadians deserve to know the true reasons for which our government has repeatedly adopted a belligerent posture toward China. Again and again, Canada’s government has invoked human rights to mask its true foreign policy objectives. The time has come to end its cynical misuse of human rights so that Canadians can have an honest and fact-based discussion about our government’s real geopolitical agenda.